Action Plan for the Diversion of Organic Waste in Tyre, Lebanon 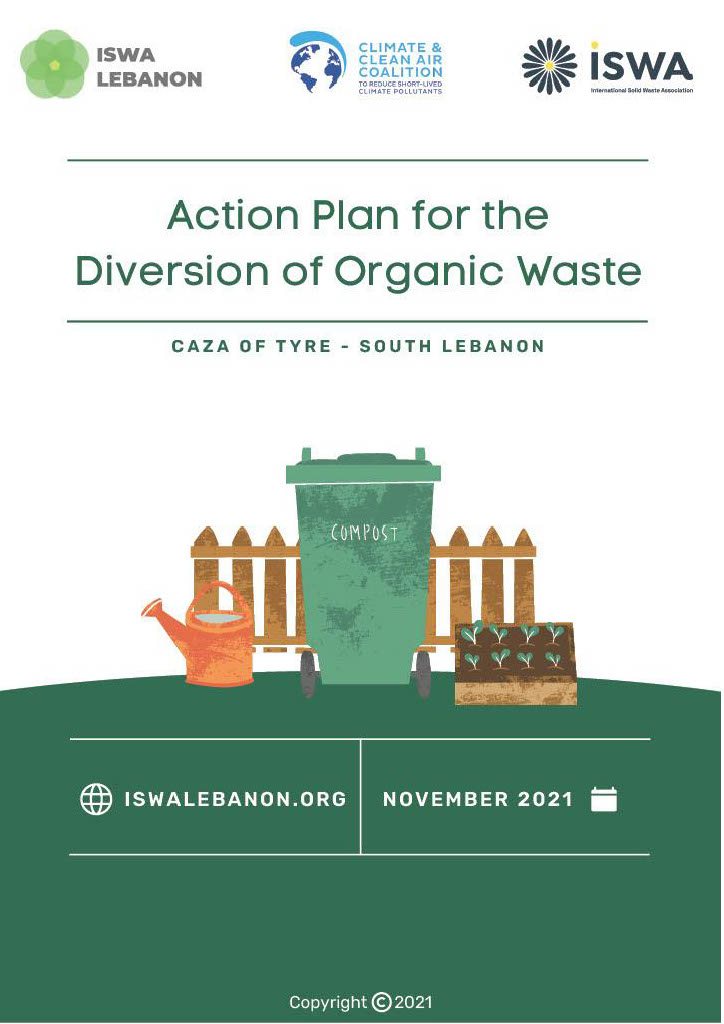 In September 2020, the International Solid Waste Association (ISWA) in collaboration with the Climate and Clean Air Coalition (CCAC) published the report “Estimation of waste sector greenhouse gas emissions in Tyre Caza, Lebanon, using the Solid Waste Emissions Estimation Tool (SWEET)”. Following the onset of the financial crisis in Lebanon as well as the closure of the Tyre waste treatment facility, a sub-project was developed that builds on the findings of the mentioned report and adapts it to the current situation.

The current report therefore aims to: 1) Estimate the impact of the closure of the waste treatment facility in Tyre on greenhouse gases (GHG) and short-lived climate pollutants (SLCP) emissions in the region, 2) Set up an action plan to treat and divert major sources of organic waste from being openly dumped, and 3) Assess the potential impact of this action plan on the reduction of these emissions.

In addition to a desk review of the existing literature and studies such as the Regional Master Plan for Tyre Caza prepared by OMSAR, data was collected through two main approaches. First, data estimates for solid waste quantities accepted by major Lebanese facilities were gathered from the Council for Development and Reconstruction (CDR) reports and the Office of the Minister of State for Administrative Reform (OMSAR) reports. These included data on urban as well as rural areas, the latter being more relevant to the study area. Second, data was collected through phone surveys with the municipalities of the Tyre region. This included information on waste quantities and types, municipality capabilities, current disposal schemes, etc.

Several interventions were studied as options to treat sources of organic waste in the area. Advanced methods that require high investment and operational costs were discarded due to the massive drop in financial capabilities of the government as well as the municipalities. Instead, this study focused on composting at the individual, community, local, and central levels.

Three composting scenarios were selected, a central composting facility in Abbassiyyeh, a local composting facility in Aalma Ech Chaab and community composting in Bmaryamine. To assess the impact of these scenarios on emissions, the Solid Waste Emissions Estimation Tool (SWEET v 4.0) tool was used. The adjusted business as usual (new BAU) scenario (post-crises) showed a decrease in these emissions correlated with the overall waste generation drop. Results also showed that the central facility processing about 17 tons/day was the only scenario that would provide the significant emission reduction with around 6.4% decrease from the new BAU by the year 2050. However, greater emission reduction can be achieved by combining the implementation of the centralized composting facility with additional measures at disposal sites namely ending open burning, rehabilitation of dumpsites, landfill construction with methane combustion. With this scenario emissions reductions can reach as high as 53.9% from the BAU by 2050.

Finally, the financial modelling tool OrganEcs, developed by the US EPA, was used to perform an initial assessment of the financial details for three options related to the central composting facility pilot scenario in Abbassiyyeh. The options included different variations for who would cover investment costs (equipment, infrastructure, etc.) and transportation of waste to the facility. It was shown that the composting facility may present a profitable model if the waste received is properly sorted and transported to the site free of charge.